Fans can get behind the wheel of the stunning Mazda RX-Vision GT3 Concept, now available for purchase in the PlayStation® Store (under Gran Turismo game Add-Ons). Gran Turismo are also hosting two exciting competitions in line with Mazda’s virtual release.

The “Mazda RX-Vision GT3 Concept” is a co-creation of Mazda's designers and Polyphony Digital's digital modelers, based on the original Mazda RX-Vision Concept car that was first unveiled at the 2015 Tokyo Motor Show. This follows the subsequent reveal of the Mazda Vision Coupe at the same event in 2017, ushering in a new era of Mazda design and innovation.

Showcasing a stunning evolution of Mazda’s renowned Kodo design language, the rotary powered rear-wheel drive sports car won international praise and accolades, including being named “Most Beautiful Concept Car of the Year” in the prestigious Festival Automobile International in 2016.

The virtual race car mirrors the elongated shape of the concept, with flowing lines and smooth surfaces that promise performance, going a step further with a wider tyre tread to give stronger road presence.

The front midship and transaxle rear-wheel-drive configuration achieves an ideal 48:52 front / rear weight distribution, while aerodynamic performance is optimised by a large engine hood outlet and a front lower spoiler that controls cooling performance and front downforce, along with a rear spoiler and under diffuser that increases rear downforce and ensures rear wheel traction.

It's powered by the next-generation Skyactiv-R 4-rotor engine that generates a hefty 490 kilowatts at 9,000rpm.

Like all Mazdas, the interior layout of was developed in pursuit of superior ergonomics according to Mazda’s human-centred design philosophy. The shape of the seat, driving position and pedal arrangement were optimised, and each function within the cockpit was arranged with an emphasis on ease of operation. 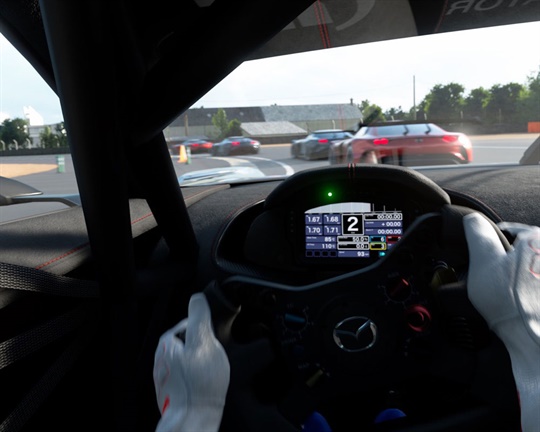 While you wont be able to sit in for real, there's certainly a lot to admire, with each of these details carefully recreated for the in-game experience.

Within Gran Turismo Sport the car is a certified FIA GT3 vehicle, or category GR. 3, which is for conceptual models with similar specifications and performance.

Which means Players who use Mazda vehicles, such as RX-Vision GT3 Concept, in Gran Turismo Sport will automatically be granted seed rights to participate in the FIA certified Gran Turismo Championship (world tours) to be held in various locations around the world in the 2020 season.